I've read a number of favourable reviews and reports on On One Hour Wargames and  on Friday night I was looking on Amazon and and said to the wife if we've got any money left, from all the overtime I'm doing, when we get paid could you order me one. What a girl she went on to Amazon and with her prime account ordered me one there and then. It was a bit late for the next day delivery so I was expecting it tomorrow. But this morning it was delivered. 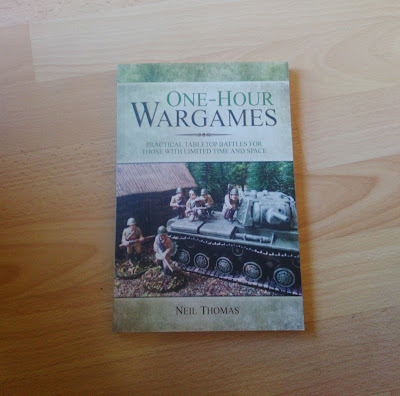 I hoping that this book will motivate back into gaming as the cover states 'for those with limited time and space's. There is also a chapter on solo wargaming.

Onwards and upwards.
Posted by Dannoc at 11:16 7 comments:

The French commander and generals are to be the last of my bases for the French contingent of my AWI project.
After finishing the painting  a couple of weeks ago I brushed on my preferred  Windsor and Newton's galleria mat varnish. When dried the blue jackets had a gloss sheen to them and then, in a moment of madness, I picked up an old can of mat spray varnish and sprayed them. They greyed. I wanted to bang my head against the wall. I took the can out into the garden along with my air rifle and removed the temptation from my grasp. A few touch ups and some more brush on varnish and they are suitable.

The French commander and a Commissaire des Guerres. 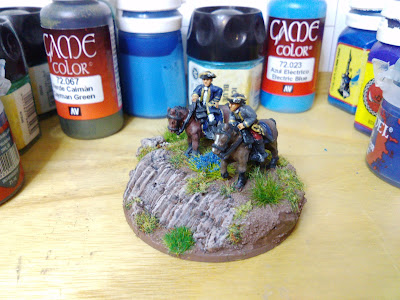 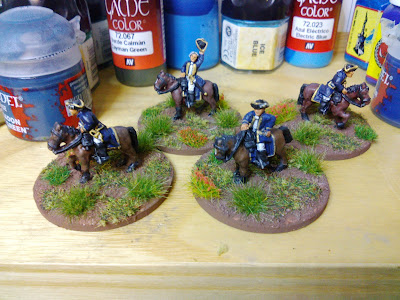 And the whole French contingent.

Next up something new for one of my ongoing projects.

Yesterday I made the shortish trip to Reading for the Warfare show. I left at 9.10 and was there in 35 minutes. The drive was pleasurable through the country lanes of south Oxfordshire and Berkshire.
When I arrived I parked easily and sat for 5 minutes or so before finding the parking pay machines. Ye god's what a rigmarole. There were only two machines by reception, one of which was not working, and a tablet type unit which the operator was having a few issues with. A long queue was forming before me and was a lot longer by the time I got in. But after that the show was it's usual pleasant self. There were some great looking games on show and a great mix of traders.
I managed to spend 5 hours there and as usual enjoyed my day out.  The only downside really was the fact that I didn't sell the two FOW box sets I took to the bring and buy. eBay for those then.

As for the loot - a bit of a mix with no big spends. Just a lot of bits and pieces. 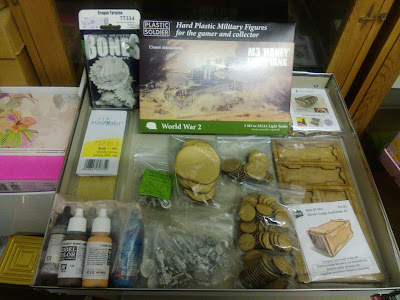 From the top left is a reaper bones Dragon Tortoise. A PSC box of 15mm Stuart Honeys. A pack of 2 warbases 15mm ore tanks . Below that are various accessories, MDF bases ,tufts and some paints. Also is a 15mm neo Assyrian chariot from Magister Militum (hopefully that'll complete the army) and a few packs of GZG Kra'Vaks, all new releases. Finally there is an MDF 20mm container kit from Blotz. Not sure on the scale as I wanted it for 15mm sci-fi. I see how it compares when it's made up.

I've been painting on and off for the past month on a couple of projects but haven't taken any pics. As I'm off this week I hope to catch up with that and put a few posts on here.