Spring tomorrow and the Flashing Blade.

Two months have gone by since my last post. I haven't been idle but not as busy as i should have been. My 15mm PeterPig paras are nearly complete just the bases to do. These should appearing over the next month.

Whilst painting I've been watching "The Flashing Blade". 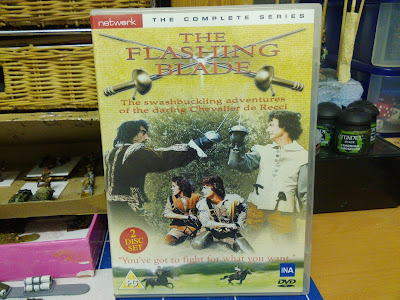 As a youngster this was aired every summer holiday on TV. It was the swashbuckling adventures of the daring Chevalier de Recci. Great flamboyant acting from Robert Etcheverry in the staring role. The dubbing on the first eleven episodes was ok but the final episode was left in French but with English subtitles.
Would recommend this for a fun bit of entertainment whilst painting.

Hope to have some painted troops next time.