Well the last month has wizzed by but I have not been idle.
The club has proved a great experience with friendly guys and some great games. I've had ago at Congo,  Saga, 7TV, Fog and Blood Red Skies. I also enjoyed watching a game of Bolt Action and should be taking my Chindits along in a few weeks for an outing. It should be a good game with 2 players a side.
As for Fog I took along the finished units that I had been busy painting up recently (and the remainder (10 chariots)) were loaned by loan by one of the other members.

The Neo-Assyrians has been one of those projects that has been on the go for a number of years. As they have fought a battle now thought I'd share a few photos of them over the next week or so.

First up are some tribal levies
Bow 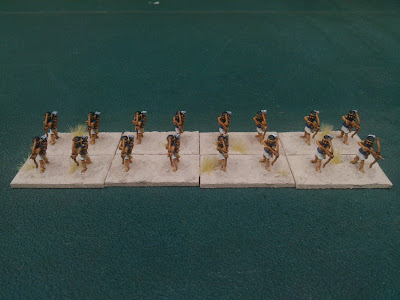 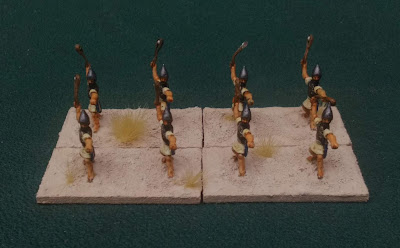 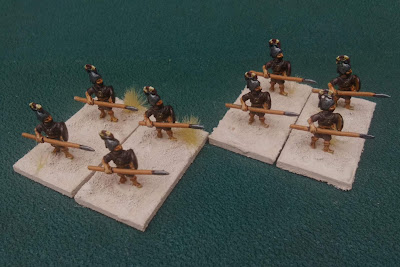 All models are from Magister Militum/Chariot Miniatures.

Thanks for dropping by.

And now for something new.

A couple of Thursdays ago I went along late in the evening to Becconsfield to find out about a reasonably local wargames club. The Wycombe Warband. I spoke to a few guys and they seemed a friendly bunch.  3 of them were having a game of Congo which seemed like a fun game. There was also another skirmish game or two on the go  along with some sort of space craft game.
This week I went back and joined in a game of Congo. I had a great time even though my dice rolling was horrendous (nothing changes).  There were a lot more games being played that night, with games of Saga, Bolt Action and a starwars game with some amazing scenery along with a couple of others I didn't really see.
At the end of the evening I paid my subs and for the first time in 20 years have joined a wargaming club.
Posted by Dannoc at 18:02 3 comments:

This is my last wild west installment for the time being. This stagecoach was originally painted 20+ years ago and has just had a major repaint. 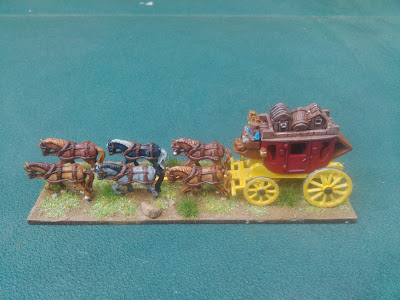 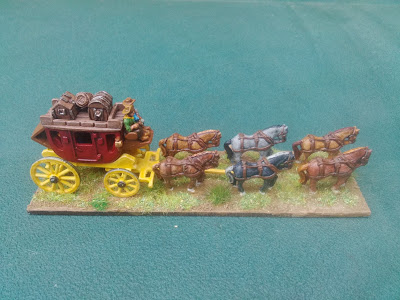 I'm not sure of the make but at the time I was buying a few bits of freicorps and minifigs so it could be either of them though Friecorps would probably edge it.

Next time something different.
Posted by Dannoc at 22:49 4 comments:

I was born under one wandering star.
Lee Marvin gave the idea to paint my wagon a different colour to plain brown and a quick look on Google showed me a few examples of blue wagons. 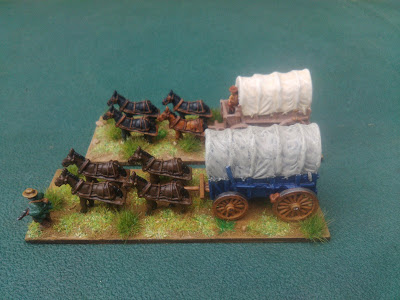 The blue is PeterPigs pack 92 settlers wagon, recently bought and the brown is peterPigs pack 65 supply wagon, though this was bought and painted more than 20 years ago. 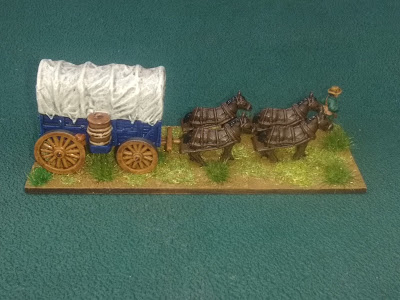 The supply wagon was touched up and a wash or two applied and then debased. 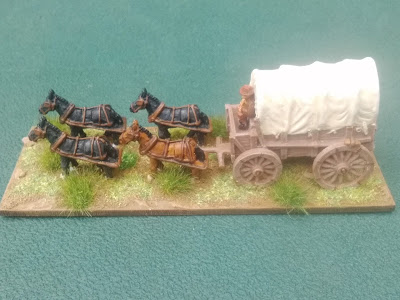 Hopefully I will have a couple of pictures tomorrow of the stagecoach.

Cattlemen characters and a freebie figure.

Just a quick post to show I'm still about and painting.
The Cattlemen are completed just need me to take some pictures and I'm progressing with two new projects and hope to have a few elements of both completed and photographed in early may.  Though I think my idea of starting two projects simultaneously was a bit misguided.

The following pictures are of a couple more of Mr Piggy's character packs. 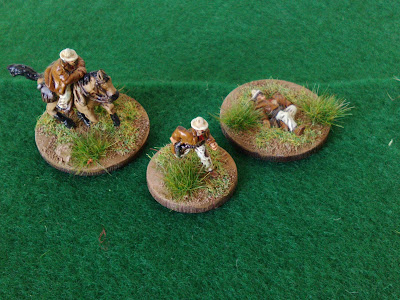 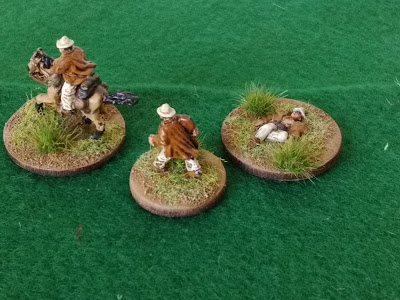 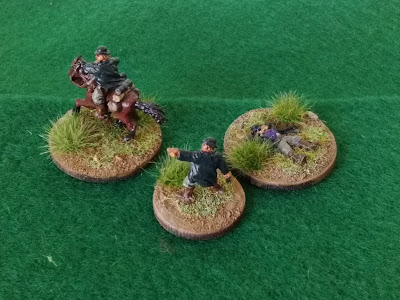 And a freebie figure that came from PeterPig a few months back. 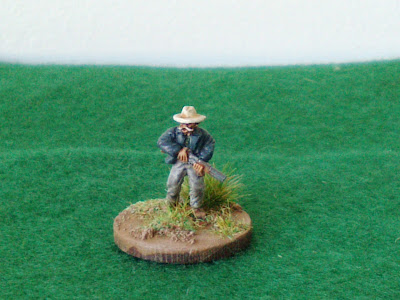 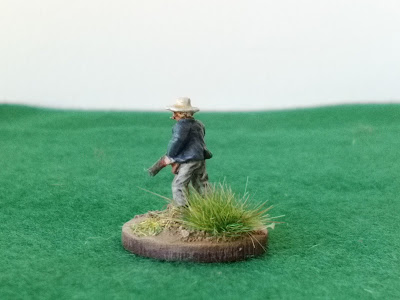 The bases have been touched up since the photos were taken - dont know how I missed that !

That's it for today.

Labels: 15mm, Hey You in the Jail, Peter Pig

The weather's turned wet and horrible since Monday but luckily I did manage to take a few pictures on that day.
The chuck wagon is pack 91 from PeterPigs wild west Cattlemen range. The body of the chuck wagon is resin and all other parts white metal. The model went together nicely.  Originally I was going to paint the wood part of the body in wood brown but after having a peruse on the internet I found a couple of green examples which I thought looked rather good. 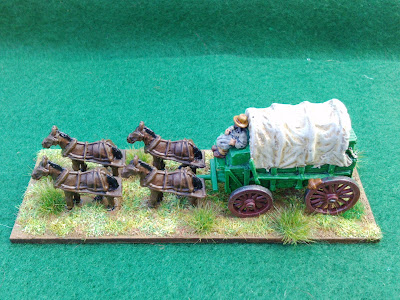 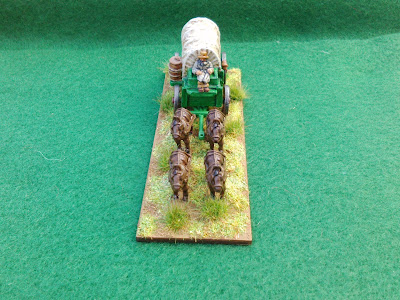 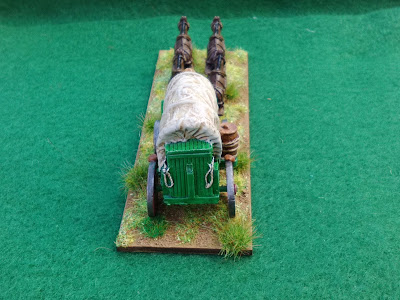 Labels: 15mm, Hey You in the Jail, Peter Pig

As I've got the week off and the sun was out I thought I'd take some pictures of some finished figures and will put up a number of posts over the coming week.

First up is petepigs Cattlemen mounted with rifles (pack 89). 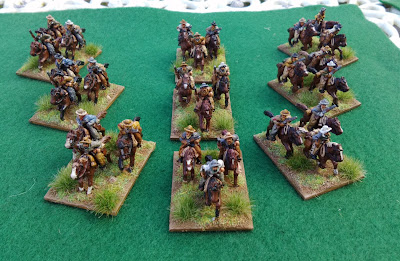 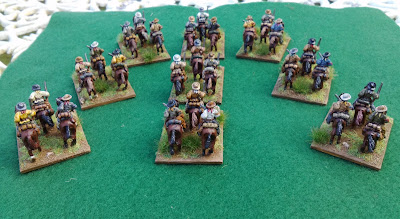 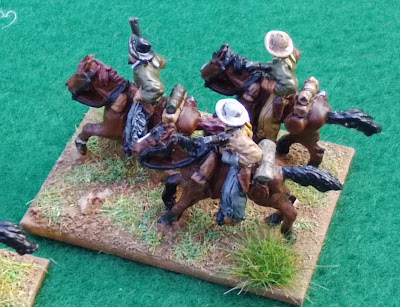 The eagle eyed amoungst you will have noticed the basing has changed. When it came to basing these I decided that the sandy base that I have done for the rest of the range didn't seem right for these chaps. Cattle eat grass so bases should be more green/brown than sand.
What it does mean is that I need to go back and re-do the basing for the rest of these cattlemen. That should keep me busy.